One of the last Indigenous languages lives to sign another day

One of the last Indigenous languages lives to sign another day 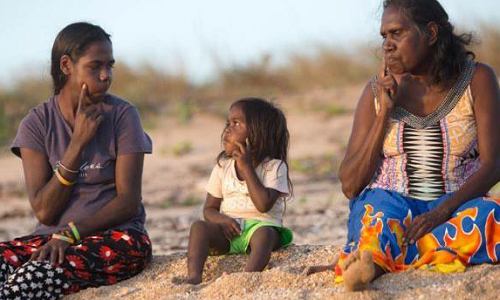 Like all hearing people in North-East Arnhem land, the head of the local school at Yirrkala grew up using sign language as much as she spoke – in the same way hearing and non-hearing Indigenous people in northern Australia had communicated for 60,000 years.

“It was an everyday thing,” said co-principal of Yirrkala School, Merrikiyawuy Ganambarr-Stubb. Today the local sign language is alive, but not many use it.

Thanks to a donation by Emma Watkins, of the Wiggles, a new handbook will help keep Yolngu Sign Language (YSL) “alive for the next generations”, said Ms Ganambarr-Stubbs.

YSL is one of about a dozen Indigenous sign languages left in the world. Before colonisation there were around 500 Indigenous languages in Australia, most with an alternative and distinct sign language closely tied to the local ecology and environment, said anthropologist and linguist Dr Bentley James.

For 30 years Dr James has worked with elders in North East Arnhem land including 2012 senior Australian of the Year Laurie Baymarrwangga – the traditional owner of the lands who died at 98 in 2014 – to preserve these extremely rare spoken and signed languages.

Unlike most sign languages which were developed primarily for those with hearing loss, Dr James said Australia’s sign languages were created as part of the “unique and ancient relationship between hearing people and the land”. That made them vulnerable and highly perishable when people were displaced.

Dr James was struggling last year to raise enough money to produce an illustrated handbook of Yolngu Sign Language (YSL) when Watkins donated $20,000 out of a total of $53,000.

To Emma Watkins, the new handbook was amazing and special. “We should be celebrating. How amazing is it that we have a signed language that is tens of thousands of years old? We have a lot to learn.”

The handbook includes photos of North-East Arnhem Land people illustrating more than 500 signs ranging from nouns and verbs to more abstract concepts and euphemisms. The book includes signs for “wake-up”, “exist” , “internet”, “surprise” and “remember an unkindness” and “go around secretly to find a toilet”, which is useful if you don’t want to alert everyone to a pressing problem. We should be celebrating. How amazing is it that we have a signed language that is tens of thousands of years old?

“People don’t realise this language is part of the rich identity of this country,” said Watkins. “The language is so ingrained in the land and the culture. It is so important, but we don’t recognise it as important yet,” she said.

When Watkins is not performing and filming with the Wiggles, she has been completing a doctorate in integration of dance, film editing and sign language at Macquarie University. She is also undertaking a diploma in Auslan at the Deaf Society of NSW so she can communicate fluently.

Last week some of the first handbooks were distributed to schools in the Northern Territory including Milingimbi and Elcho Island School in North-East Arnhem Land. The Yirrkala school already uses YSL to teach students. Co-principal Ms Ganambarr-Stubbs said when she was a child, it was used in every day life, if you had to be quiet in the bush, or were in danger and in ceremonies, such as where women weren’t allowed to talk in front of brothers.

At Yirrkala school, they use both Auslan and YSL, but the latter is easier because most children have seen it in use.

Around the world spoken Indigenous languages are threatened or dying. Indigenous sign languages are fading even faster. Of the remaining dozen, almost all are Australian, with one native American Plains Indian variety known, said Dr James. Without further action, they will be gone in a generation, he said.

By Julie Power for The Sydney Morning Herald