Listening to the Future — Is Prevention Better than Cure?

Trained as a neuroscientist, his leadership roles supporting the development of research into hearing and deafness and the translation of research into benefits for those with hearing problems informs his view that engaging with individuals and communities through all sorts of avenues – conversations, media, and the arts, is key to securing hearing health and positive listening futures for all.

Since 1999, the Libby Harricks Memorial Oration series has featured the world’s leading academics, researchers, policymakers, advocates, and commentators. It raises awareness of issues of hearing health, deafness, and ear and balance disorders.

Hearing Australia is proud to support the Libby Harricks Oration and collaborate with the Deafness Forum of Australia to help improve hearing health and make access to expert care easier so everyone can experience the joy of sound.

David McAlpine’s oration is presented by the Deafness Forum Australia, Audiology Australia and Hearing Australia, celebrating 75 years of service, expert hearing care and innovation to the nation. For 75 years, Hearing Australia has provided world-leading research and hearing services for the wellbeing of all Australians. Hearing Australia cares for thousands of children, adults, Aboriginal and Torres Strait Islander peoples, pensioners and veterans every week in our cities, regional centres and some of the most remote parts of our nation.

The Libby Harricks Memorial Oration series honours the memory of the first President of the Deafness Forum Australia. For her work on behalf of hearing-impaired people, Libby Harricks was made a Member of the Order of Australia in 1990. Scroll to the bottom of this page to read more about the remarkable Libby Harricks.

(2021) The legendary Professor Harvey Coates AO presented the 2021 Libby Harricks Memorial Oration in a webcast in March from Perth in Western Australia. Watch either of the videos. Open Captioned version, or Auslan version.

The COVID-19 health pandemic caused the cancellation of the Oration in 2020.

Sisters are doin’ it for themselves >>

Hearing and Mind: What should we do about hearing loss to promote cognitive wellbeing in older age? >>

The consequences of being born Deaf in the 21st Century >>

Molecules, managers or mentors: how can we minimise noise damage in the workplace >>

Early identification of hearing impairment in Australia: Well begun is not all done >>

The bionic ear: from an idea to reality >>

Hearing and communication: a primary concern in aged care >>

Hearing Loss: the silent epidemic. Who, why, impact and what can we do about it >>

A sorry business: lack of progress in Aboriginal hearing health >>

Disability law and people with hearing loss: we’ve come a long way but not there yet >>

The prevalence, risk factors and impacts of hearing impairment in an older Australian community >>

The politics of deafness >>

Recent advances in the understanding of Meniere’s disease and tinnitus >> 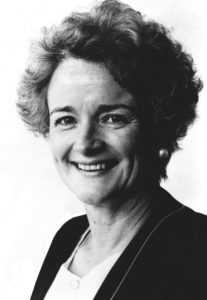 The exceptional Libby Harricks, who, in spite of progressive hearing loss, accomplished so much in her advocacy for deaf and hearing impaired people, brings to mind Nelson Mandela’s statement:

“What counts in life is not the mere fact that we have lived. It is what difference we have made to the lives of others that will determine the significance of the life we lead.”

Libby Harricks grew up with apparently normal hearing. Subsequently, as a young wife and mother, she developed a profound hearing loss. She quickly educated herself with skills to manage her own hearing difficulties and soon became committed to advocating for all hearing impaired people.

Libby was the inaugural Chairperson of Deafness Forum of Australia. In all of these purely voluntary roles, she worked tirelessly to raise awareness of the need for equal inclusion in life activities for hearing impaired people, even travelling widely throughout Australia to lobby for this on their behalf. In recognition of her advocacy work, Libby was made a Member of the Order of Australia in 1990.

After her death in 1998, Deafness Forum of Australia established the annual Libby Harricks Memorial Oration Series to honour her achievements. The Series aims to continue her vision of working towards gaining appropriate recognition, awareness, and access, for hearing impaired people. Over the years, Orations have been presented across Australia, and the Oration series has developed a well-deserved reputation for carrying forward Libby’s commitment to raising awareness of issues relating to hearing impairment.