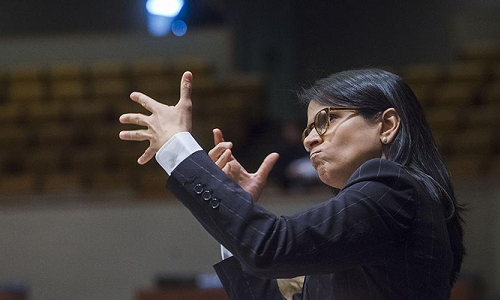 The International Day of Sign Languages is a unique opportunity to support and protect the linguistic identity and cultural diversity of all Deaf people and other sign language users.

The UN General Assembly has proclaimed 23 September as the International Day of Sign Languages in order to raise awareness of the importance of sign language in the full realisation of the human rights of people who are Deaf.

The resolution establishing the day acknowledges that early access to sign language and services in sign language, including quality education available in sign language, is vital to the growth and development of the deaf individual and critical to the achievement of the internationally agreed development goals. It recognises the importance of preserving sign languages as part of linguistic and cultural diversity. It also emphasises the principle of “nothing about us without us” in terms of working with Deaf communities.

[Image: Maleni Chaitoo addresses a meeting using sign language during the International Day of Persons with Disabilities in 2015]