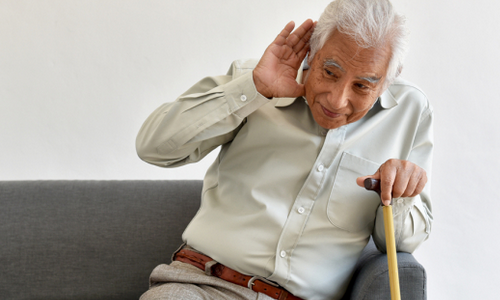 A six-year study of older Australians has uncovered an Australian-first association between the impact of hearing loss on cognitive abilities and increased risk for dementia.

In Australia, hearing loss affects 74% of people aged over 70. International studies estimate that people with severe hearing loss are five times more likely to develop dementia. Addressing midlife hearing loss could prevent up to 9% of new cases of dementia – the highest of any potentially modifiable risk factor identified by a commissioned report published in The Lancet in 2017.

A research collaboration between the Centre for Healthy Brain Ageing (CHeBA), UNSW Sydney and Macquarie University’s Centre for Ageing, Cognition and Wellbeing has confirmed significant associations between self-reported hearing loss and cognition, as well as increased risk for mild cognitive impairment or dementia.

The research, published in Ageing, Neuropsychology and Cognition, used data from 1037 Australian men and women aged 70-90 years enrolled in the Sydney Memory & Ageing Study from 2005-2017.

Individuals who reported moderate-to-severe hearing difficulties had poorer cognitive performances overall, particularly in the domains of Attention/Processing Speed and Visuospatial Ability. They also had a 1.5 times greater risk for MCI or dementia at the 6 years’ follow-up.

While hearing loss was independently associated with a higher rate of MCI it did not show this in people with dementia. This likely resulted from the number of people with dementia at six years’ follow-up being too small to demonstrate a statistically significant effect.

Studies are now emerging that hearing aids may reduce this risk. Large, multi-centre trials examining the wide-ranging benefits of hearing interventions in older adult populations with hearing loss could determine the potential for risk reduction associated with this significant and modifiable risk factor for MCI and dementia in older age.

The Sydney Memory and Ageing Study is an observational study of older Australians that commenced in 2005 and researches the effects of ageing on cognition over time.