Bringing the joy of musicals to Auslan users

Bringing the joy of musicals to Auslan users 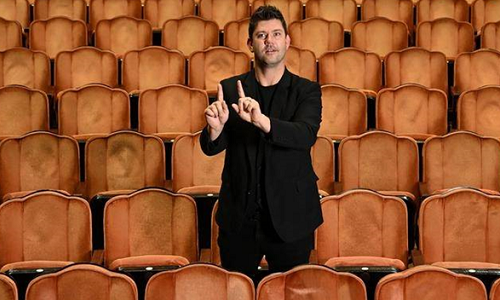 When the Moulin Rouge musical cast finished belting out their act one show-stopper during a recent Sydney performance, a group of viewers closest to the stage didn’t clap.

Instead, the audience members stretched up their arms and waved open palms at the actors in a show of Auslan applause.

“10-15 years ago, Deaf people had to seek out the production company and organise and pay for their own interpreters, but now that’s changed,” interpreter Brendan McQuiggin tells AAP.

Auslan is a form of visual communication used by 16,000 members of the Deaf community nationwide. Want to know more? Read the Deaf Census snapshot.

While it routinely features at leaders’ COVID-19 press conferences or natural disaster briefings, many people are less familiar with its use in non-emergency situations.

During the Auslan-interpreted performance of Moulin Rouge! The Musical, Mr McQuiggin and colleague Rosemary Profilio translated multiple characters at once, switching personalities from the sleazy duke to the boyish protagonist. They moved from complementary to synchronised signs as singers shifted between melodies and harmonies.

The Auslan interpreters deferred to the stage during dance numbers, but for the rest of the three-hour performance, they translated the musical’s lyrics, dialogue, context and emotions into sign language.

“It’s about equivalence. We’re not an additional performance to the performance, we’re just language experts who are delivering language to an audience that otherwise cannot have access to something they’re passionate about.”

By Kat Wong for The Islander. Image: Auslan interpreter Brendan McQuiggin at the Capitol Theatre in Sydney.  (AAP Image/Dean Lewins)